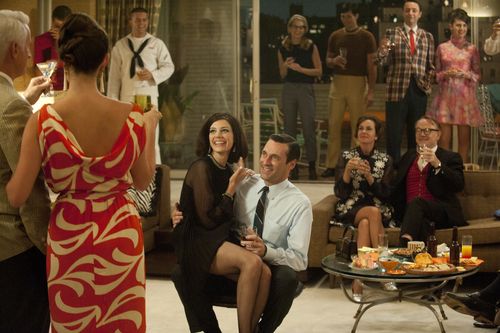 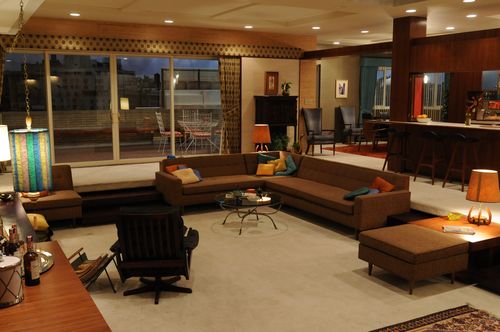 Mid-century furnishings on the "Mad Men" set were found in shops in Southern California. (Photo from latimesblog.latimes.com)

Many of the pieces in the living room and dining room were found by Didul in stores that are on the Antique and Retro Shopper's Maps. The glass-topped coffee table in the above picture came from Deja Vu in Long Beach. Deja Vu carries Art Deco to mid-century modern European furnishings. Didul found the Lied Mobler black leather lounge chair in Los Angeles in Galerie Sommerlath, a sophisticated gallery that carries mid-20th century designer furniture, lighting and paintings. 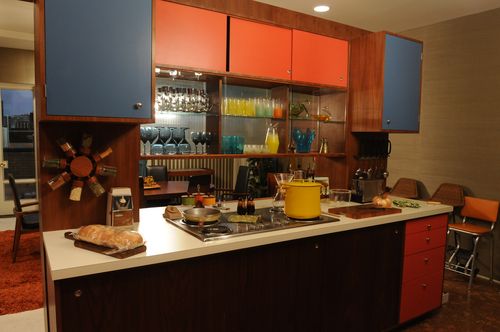 The Don Draper Kitchen on the "Mad Men" Set (Photo from latimesblog.latimes.com)

The LA Times story says that much of the glassware, cookware and kitchen accessories pictured above were found in the antique malls in Orange and Pomona, and the Pasadena Antique Center and Annex and Novotny's Antique Gallery in Pasadena.

Didul found pieces on Etsy, Ebay and Craigslist as well, but the majority of the design came from local Southern California dealers.

Make your home a "Mad Men" home by shopping the dealers metioned above.  Find them on the Long Beach, Los Angeles or Pasadena Shopper's Map guides.

The comments to this entry are closed.